The chairmen of the Senate Finance Committee on Thursday unveiled a roughly $1 billion tax cut proposal that would provide relief to the overwhelming majority of North Carolinians – with the most dramatic reductions going to middle class and working families and job-creating small businesses.

The Billion Dollar Middle Class Tax Cut Act, sponsored by Sen. Jerry Tillman (R-Randolph), Sen. Tommy Tucker (R-Union) and Sen. Andrew Brock (R-Davie), would continue Republican-led efforts to reform, simplify and cut state taxes – making our tax climate the most competitive in the region and among the most competitive in the nation. Beginning in 2018, the proposal would:

This change would move North Carolina closer to the goal of phasing out state income taxes by removing about 94,000 additional families from the tax rolls. This change together with the expansion of the child tax deduction would make all families of four earning less than the federal poverty level of $24,600 completely exempt from North Carolina income taxes for the first time.

Under the bill, 99 percent of taxpayers would pay less or pay no state personal income taxes – and the bulk of the tax cut would benefit middle class and working families earning less than $50,000 per year.

For example, a married couple with two children earning the N.C. median household income of roughly $47,000 per year receives an additional tax cut of nearly $200 under the proposal – eliminating close to 14 percent of their total state tax burden. Combined with other major tax reductions enacted by the General Assembly, the same family would pay $318 less in state income taxes than they paid in 2012.

Because the Billion Dollar Middle Class Tax Cut Act focuses tax cuts on low- and middle-income North Carolina families, the effective income tax rate reduction is greatest in our state’s economically struggling rural areas. For example, the tax cut for a family making the median household income in each county ranges from a high of 39 percent in Bertie County (which has the state’s lowest median income) to 7 percent in Wake County (which has the state’s highest median income.) 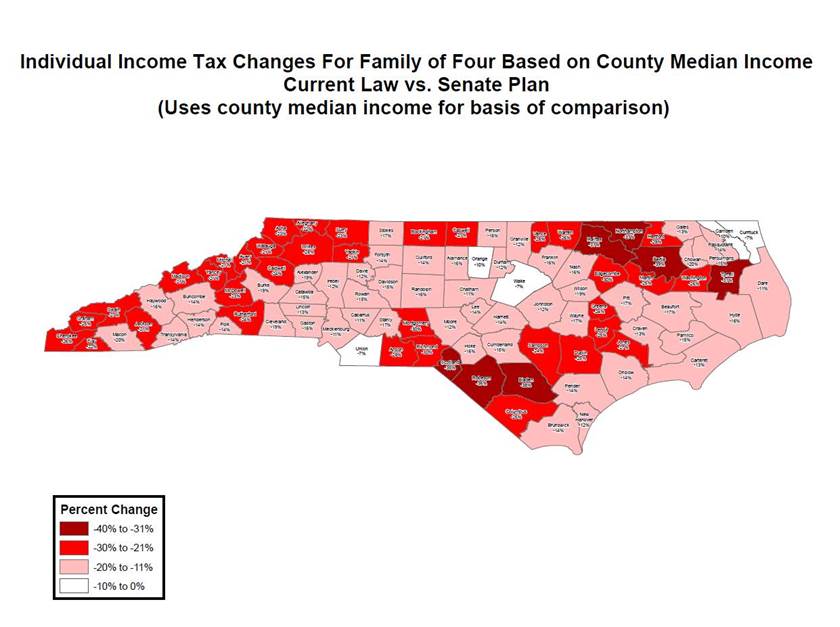 This legislation will bring the total annual amount of tax relief provided to North Carolina families and job creators to more than $4.5 billion per year since Republicans assumed leadership of the state legislature in 2011.

“Republican-led tax reforms have helped boost our economy from the bottom of national rankings to one that is outperforming the nation – and this bill continues the policies that have yielded consecutive budget surpluses and $1 billion in projected revenue growth over the next two years,” said Sens. Tillman, Tucker and Brock. “Instead of spending our taxpayers’ hard-earned money, this proposal puts money back into the pockets of the hardworking families and small business owners who earned it while strengthening our tools for business recruitment and job creation.”