Republican Response to State of the State Address 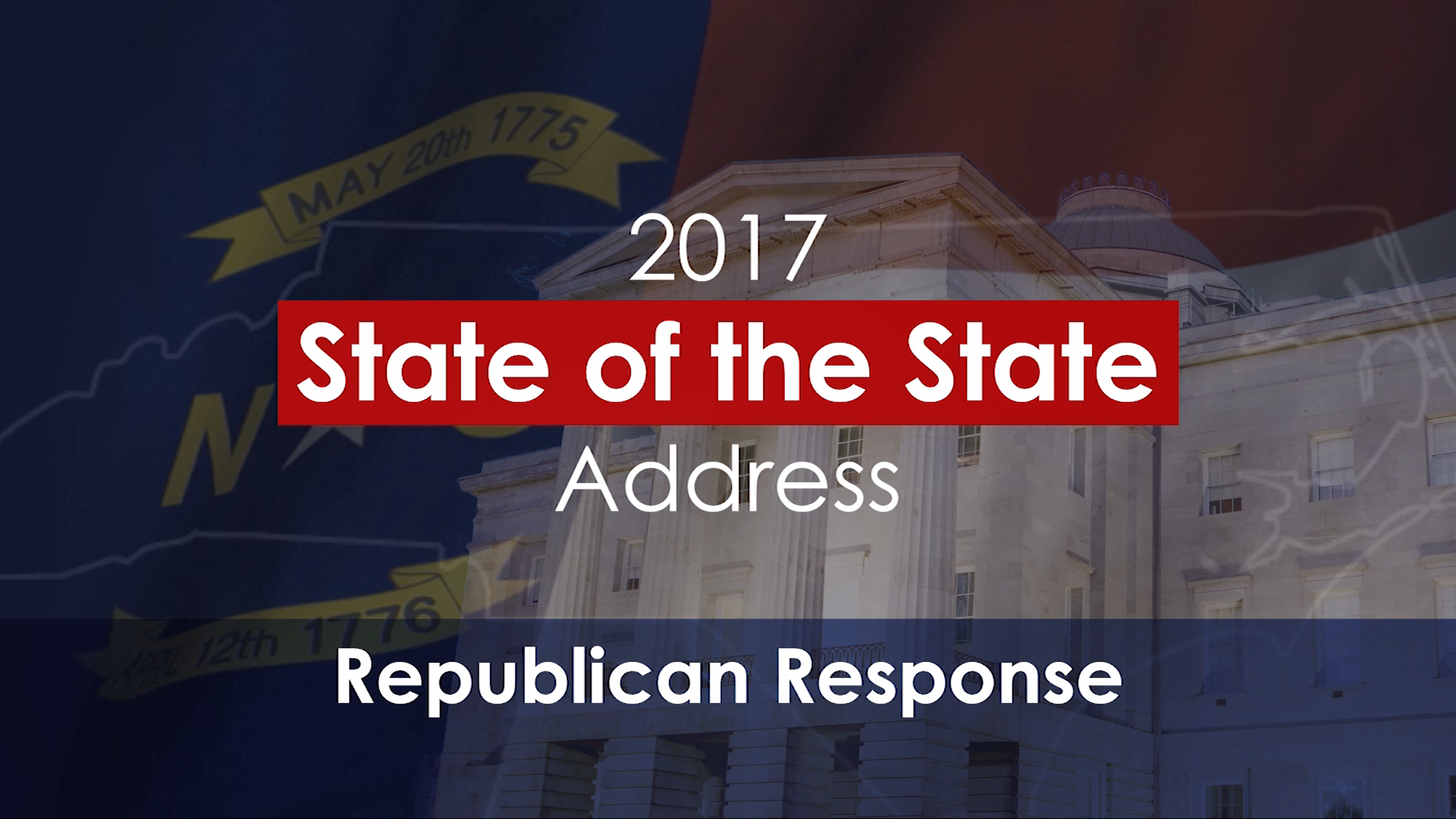 Senate Leader Phil Berger (R-Rockingham) delivered the Republican response to Gov. Roy Cooper’s State of the State address Monday.  Below are his remarks as prepared:

“Good evening. This is the second time I’ve had the privilege to give the Republican response to a Democratic governor’s State of the State address.

“Six years ago, Republicans had just assumed leadership of the General Assembly for the first time in more than a century. Former Speaker and current U.S. Senator Thom Tillis and I stood before you then to chart a new course for our state. Our vision was simple: trust more in the people of North Carolina, not in the institutions of government. This is what we said:

“There are new majorities and 43 new lawmakers in this General Assembly.

“The state of our economy is grim. And North Carolina faces serious challenges.

“But instead of maintaining the status quo, and continuing the failed policies that got us in this mess, we’re working to usher in a new era of government responsibility and accountability.

“For far too long, decision-making in these halls has been driven by the belief that government has all the answers…and government can fix almost any problem.

“Republicans have a better plan. House and Senate Republicans are passing legislation that empowers citizens to make their own decisions about health care, create their own wealth, control their own education, and pave their own way to a brighter future.

“You’ve heard politicians promise to curb government growth and return money to taxpayers before. But I want you to imagine something with me for a moment:

“Suppose a group of candidates launched a campaign promising to do some very big, very different, and very bold things. A platform guided by the simple maxim: ‘That government is best which governs least.’

“These candidates are crystal clear about the direction they want to take the state.

“And when they get elected, they immediately start doing exactly what they said they’d do.

“As promised, they slash the unemployment rate in half by empowering the private sector to create half a million new jobs.

“They stop spending and borrowing beyond their means. They prioritize what matters most, like public education. They turn a $2.5 billion deficit into a half billion dollar surplus.

“They pay back a $2.7 billion unemployment insurance debt to the federal government.

“They dramatically cut taxes and move their state’s tax climate from 44th to 11th best in the nation – because they believe citizens and job creators are better stewards of their own money than politicians.

“They invest generously in the state’s depleted rainy day fund, so they will be well-prepared for recessions or natural disasters.

“They tackle the affordability of college. They guarantee no tuition increases during a student’s four years at state universities and cut the cost of tuition to just $500 per semester at three campuses – because they understand a college degree gives people the freedom to pursue their dreams.

“They put students first in public schools. And after years of teacher pay freezes and furloughs, they raise average teacher pay by more than fifteen percent in just three years.

“And they develop a Read to Achieve Program to improve student literacy. Because they know a society that fails to teach a child how to read by the end of 3rd grade fails to give that child the most important tool for success.

“And the state’s reading scores and graduation rates rise.

“What would you think about a group of elected officials who kept those promises?

“And then, those promises worked.

“Because in the last six years, that is exactly what House and Senate Republicans have accomplished in our state.

“If anyone but Republicans had accomplished all of this, the press would herald North Carolina as a national success story.

“Instead, the institutions of the Left – the press, the Democratic Party, and liberal special interests – have ginned up great controversy and false outrage. They organize vulgar rallies and protests. They disrupt public meetings. They attempt to sabotage our state’s economy and put regular North Carolinians out of business.

“They call their neighbors who vote conservatives into office stupid, uninformed, dupes, and deplorables.

“Tonight we heard the Left’s new champion – Roy Cooper – push their vision for the future of North Carolina.

“Except it is not a vision for the future of North Carolina at all – it’s a mirage.  It’s merely a retreat to our troubled past.

“What the press will undoubtedly praise as a return to a golden age is in reality a step back to out-of-control spending, back to high taxes, back to blindly throwing money at an education bureaucracy that fails to put students first. It is, ultimately, a step back to rising unemployment rates and joblessness.

“Across the state, Republican legislators received hundreds of thousands more votes than their Democratic opponents. Yet Roy Cooper, who squeaked into office by a mere ten thousand votes, has treated his election as a mandate to fight Republicans rather than an opportunity to work together.

“Instead of seeking middle ground, he’s sued to block commonsense, popular reforms like Voter ID. And laws he doesn’t like, he simply ignores.

“Gov. Cooper talks often of compromise, but works behind the scenes to kill real compromises.

“Like he did in December, when he ordered Senate Democrats to vote against a repeal of House Bill 2. And like he did earlier this month when he slammed the door on a bipartisan state House proposal to repeal House Bill 2 supported by our state’s business community.

“Divisiveness and hyper-partisanship have diminished the public’s faith in their elected officials. And where there is opportunity to work with Gov. Cooper, we will be the first to extend a hand. But we need – and the voters expect – the governor to reciprocate.

“In closing, know that Speaker Tim Moore and I, together with House and Senate Republicans won’t allow North Carolina to move backwards. We will continue to trust you – not government – to make the best choices for your family. And we will continue to be guided by the principle: ‘That government is best which governs least.’

“Thank you.  And may God bless the state of North Carolina.”