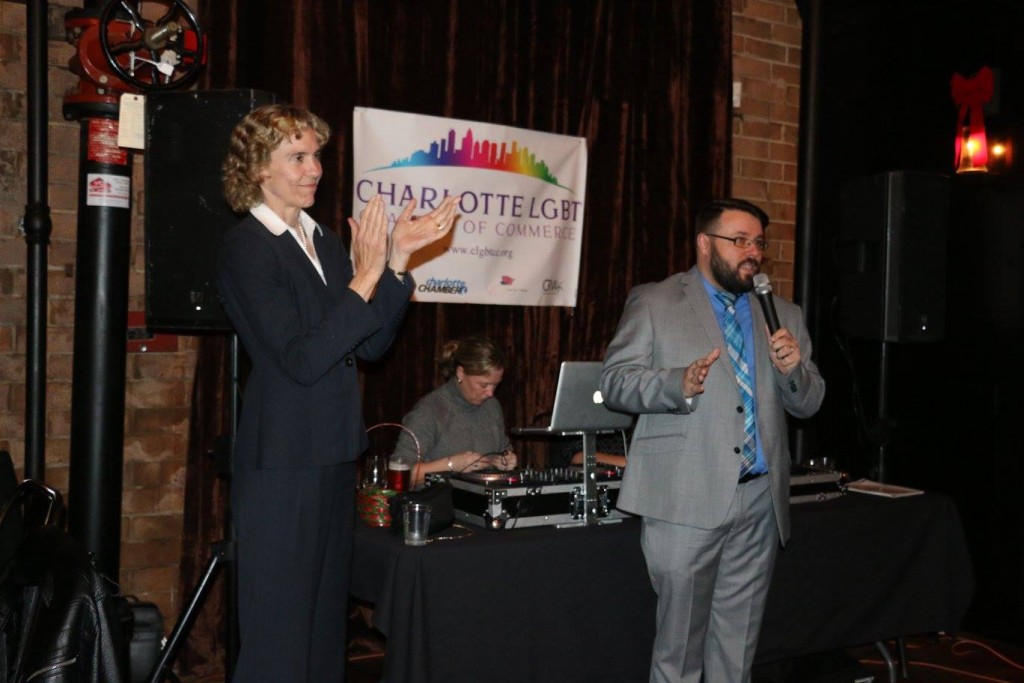 "When Charlotte Mayor Jennifer Roberts teamed up with a convicted child sexual predator to pass a radical bathroom policy allowing men to use girls’ locker rooms and bathrooms, the Governor warned her the legislature would take immediate action to protect North Carolina families.  If Jennifer Roberts, Roy Cooper and the far-left Political Correctness Mob she's unleashed really care about the economic future of her city, they’ll stop the misinformation campaign immediately and start telling the truth about this commonsense bathroom safety law before more damage is done to the city she was elected to lead and the state Cooper was elected to protect.”

As soon as she was elected last November, Charlotte Mayor Jennifer Roberts (pictured here at an event with the convicted child sexual predator) teamed up with a group of far-left activists lead by a convicted child sex predator to push as her top priority one of the most radical far-left social agendas in America.  The crown jewel of their far-left agenda was an absurd, politically correct, overreach that requires every business serving the public including YMCAs, restaurants and public arenas to allow grown men to use the women’s and girl’s bathrooms, locker rooms and changing rooms.

Governor McCrory repeatedly warned Mayor Roberts that the legislature would repeal any effort to force private businesses to let men into women’s locker rooms and bathrooms.  Instead of listening to Governor McCrory’s advice to allow businesses the choice of keeping bathrooms designated for either men or women Mayor Roberts doubled down.  She’s teamed up with Attorney General Roy Cooper, the Human Rights Campaign and the rest of the national Political Correctness Mob to trash the reputation of her own city and wage war on her own state.  With the help of the Liberal Media, they have covered up the truth about the bathroom ordinance supporters.  They have lied about and misrepresented what the bill does.

Unless Mayor Roberts and Attorney General Cooper call off their far-left financial supporters and political allies they will likely cause Charlotte more damage including potentially losing the NBA All-Star game.

2. The bill applies the same common-sense rule to public buildings throughout North Carolina.

3. The bill prohibits local governments from mandating businesses adopt any specific bathroom and locker room policy.  Importantly, this makes businesses free to make their own decisions regarding how to set up bathroom and locker rooms.  Businesses may choose to offer gender-neutral bathrooms and changing rooms if that is what their customers demand. Conversely, if a church wants to keep their bathrooms separated by gender they may do so.   Likewise, this bill does nothing to any business's existing or future choice to implement more expansive workplace or accommodation policies.  The bill stops local governments from dictating to business and preserves for every business the flexibility to craft its own solution to these challenges.

4. The bill, for the first time, implements a statewide policy anti-discrimination in public accommodations that goes beyond what federal law requires:

a)        It is the public policy of this State to protect and safeguard the right and opportunity of all individuals within the State to enjoy fully and equally the goods, services, facilities, privileges, advantages, and accommodations of places of public accommodation free of discrimination because of race, religion, color, national origin, or biological sex, provided that designating multiple or single occupancy bathrooms or changing facilities according to biological sex, as defined in G.S. 143‑760(a)(1), (3), and (5), shall not be deemed to constitute discrimination.

(a)        It is the public policy of this State to protect and safeguard the right and opportunity of all persons to seek, obtain and hold employment without discrimination or abridgement on account of race, religion, color, national origin, age, biological sex or handicap by employers which regularly employ 15 or more employees.

(b)        It is recognized that the practice of denying employment opportunity and discriminating in the terms of employment foments domestic strife and unrest, deprives the State of the fullest utilization of its capacities for advancement and development, and substantially and adversely affects the interests of employees, employers, and the public in general.

(c)        The General Assembly declares that the regulation of discriminatory practices in employment is properly an issue of general, statewide concern, such that this Article and other applicable provisions of the General Statutes supersede and preempt any ordinance, regulation, resolution, or policy adopted or imposed by a unit of local government or other political subdivision of the State that regulates or imposes any requirement upon an employer pertaining to the regulation of discriminatory practices in employment, except such regulations applicable to personnel employed by that body that are not otherwise in conflict with State law.