The Department submitted a budgeting request to the North Carolina Office of State Budget and Management (OSBM) on January 8, 2016 that proposed a gimmick to eliminate certain bureaucratic positions and then re-add them to appear to be in compliance with a requirement to reduce operating and administrative expenses by roughly five percent. In reality, the proposal would have eliminated a net of just three bureaucratic positions and paid for the scheme in part by using more than $2 million earmarked for the Read to Achieve program. 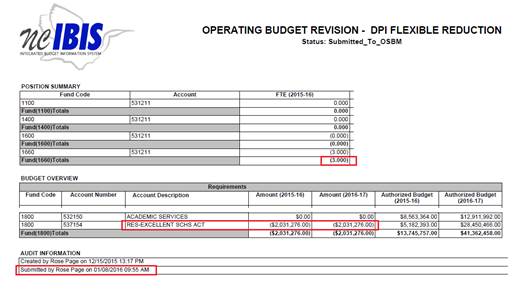 State Superintendent June Atkinson has publicly denied her Department was planning to take tax dollars away from the critical reading program for elementary school students and use it to fund bureaucracy, telling lawmakers "I give you my assurance" no such action had taken place. The Department also neglected to include a copy of the January 8, 2016 budget proposal as part of its response to a legislative request for communication on the issue.

“It’s bad enough we have a Department of Public Instruction with priorities so misplaced that they proposed shifting money intended to help children around our state learn to read to fund Raleigh bureaucrats. But for the State Superintendent to then turn around, deny it, and attempt to cover their tracks is a textbook example of the lengths bloated bureaucracies will go to protect themselves,” said Berger.