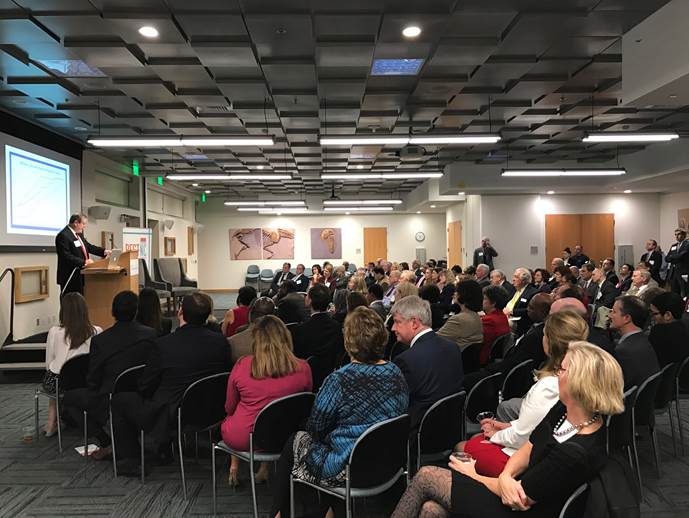 Berger discussed the General Assembly’s efforts since 2013 to reform what was an outdated base pay scale for teachers and ensure they have far greater earnings potential over the course of their careers – efforts that have resulted in beginning teacher pay reaching an all-time high and average teacher pay climbing to $50,000 for the first time in state history.  Berger reiterated the legislature’s public commitment, made in the last state budget, to raise average teacher pay to $55,000 over the next two years, and he said it is encouraging Gov. Roy Cooper has committed to partnering with lawmakers to continue increasing average teacher pay.

Below are his remarks as prepared:

“Thank you for inviting me to be here to welcome you to BEST N.C.’s fourth annual legislative gathering.

“It is good to join so many business leaders, educators and policymakers all with a shared interest in the future of public education in North Carolina.

“Before we get started, I’d like you to join me in watching a short video.

“Many of you know about – and Best N.C. has supported – the General Assembly’s focus on reforming the way we pay educators in North Carolina. We’ll talk later about how we’ve reformed the outdated base pay scale and ensured teachers have far greater earnings potential over the course of their careers.

“But we’ve also focused on ways to incentivize outstanding performance and provide financial rewards for teachers who go above and beyond to help students succeed.

“Last year, the legislature funded a $10 million pilot program for performance-based bonuses to third grade teachers who helped students make the most progress – achieving greater growth – in learning how to read.

“Please take a look at what happened in one Cumberland County elementary school when the faculty learned two of their peers would be rewarded for their outstanding work with students.

“I hope all of you are as encouraged as I am about what we just saw taking place in North Carolina’s public schools.

“And I expect most of you were seeing this for the first time. What you need to know is that 1,231 teachers across North Carolina qualified for a $3,500 per teacher bonus. And 1,183 teachers qualified by being in the top 25 percent in their local school system.  In some cases, the same teachers received both the state and local bonus, such as the two teachers you saw in the video. Unfortunately, we don’t hear much positive news from the media on things like this, or from the status quo education establishment.

“Instead, what we hear from many entrenched education bureaucrats – and from the North Carolina affiliate of the national teachers’ union – is that this kind of policy creates jealousy and dissension in our schools. In fact, some even deride it as “treating teachers like assembly line workers.”

“But as we just saw, nothing could be further from the truth.

“Instead, that policy initiative treats teachers like the professionals they are, and creates a compensation model in line with how most other professionals are paid.

“This is the kind of innovative solution – one based on business principles – that my colleagues in the General Assembly and I have worked hard to implement over the past six years in order to improve education outcomes.

“To name just a few, we’ve partnered with business groups like BEST N.C. and others to:

“Let’s talk a bit more about that last one.

“Most of you have probably heard me talk about the average 15.5 percent pay raise that we’ve provided teachers since 2013.

“And you’ve heard me explain that, prior to 2011, public schools were struggling with declining state support; that thousands of state-funded teaching positions had been eliminated, teachers had been furloughed, and teacher pay had been frozen.

“And all too often, the people most critical of what this Republican-led General Assembly has done are the same people who were directly responsible for those cuts and furloughs.

“But under Republican leadership, state funding for our public schools has reached record levels.

“Beginning teacher pay is at an all-time high, and average teacher pay has climbed to $50,000 for the first time in state history.

“But there is one data point – one significant fact – that hasn’t received a lot of attention, and that is how much more teachers will earn over the course of a career thanks to our pay reforms.

“The old pay scale was a ball and chain – it took teachers 30 years to reach the top. I can’t think of any other professionals who have to wait three decades to get to the top.

“I cannot believe that the policymakers who designed such a system could honestly contend it was done in an effort to treat teachers as professionals – on the contrary, a 30-year trek to maximum pay is what assembly line compensation looks like.

“That means a teacher will earn thousands more each year earlier in a career and have the potential to earn nearly a quarter million dollars more in base pay alone over the course of 30 years.

“So as we move forward, I cannot emphasize strongly enough how much we need your support to continue this work and achieve our goals.

“We need you to spread the word in your local communities about what is being done by the General Assembly.

“And we need your help in applying sound business principles to education policy principles to help make sure North Carolina has a highly educated workforce that is truly prepared for the jobs of the future.

“I appreciate your engagement in the legislative process and your interest in improving educational outcomes for our children. Thank you.”