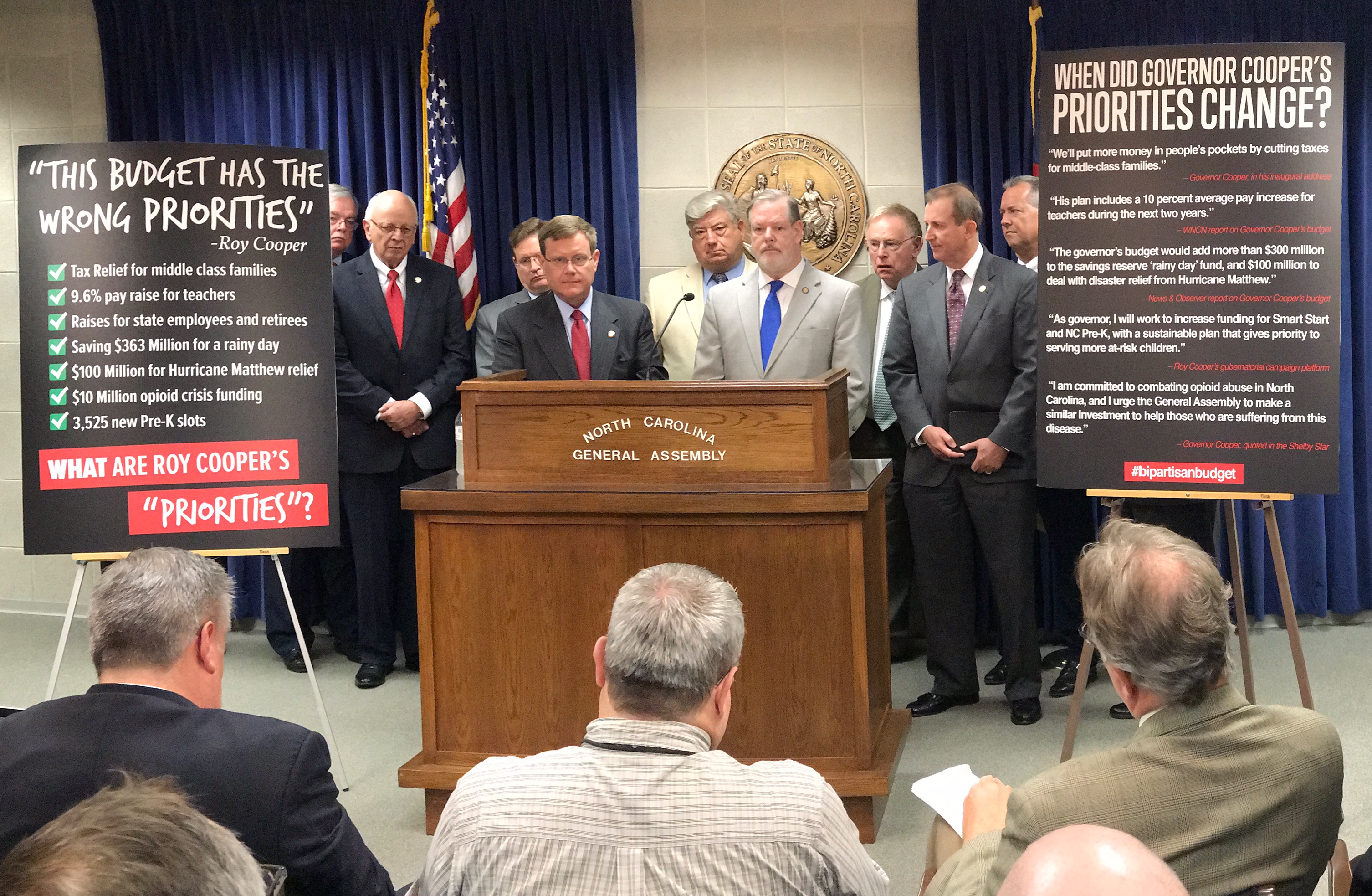 “This week a bipartisan General Assembly – with nearly 70 percent of all voting members – passed a state budget that delivers on the very same priorities Gov. Roy Cooper claims to support, based on his own budget proposal and his own words.

“Governor, your budget included a 10 percent average pay increase for teachers during the next two years.

“Guess what? The bipartisan budget provides teachers an average 10 percent pay raise over two years – on top of the generous pay raises we’ve provided teachers in recent years -- raises that you opposed.

“Governor, your budget would add more than $300 million to the rainy day fund, and $100 million to deal with disaster relief from Hurricane Matthew.

“Guess what? The bipartisan budget saves $363 million for a rainy day and provides $100 million in relief to victims of Hurricane Matthew.

“Guess what? Our budget provides a recurring cost-of-living-adjustment to state retirees.

“Governor, you’ve publicly committed to combating opioid abuse in North Carolina and called on the General Assembly to do the same.

“And our bipartisan budget does so much more. Yet to hear the governor talk, you’d think we were on the brink of the apocalypse.

“You see, Gov. Cooper claims this bipartisan budget that mirrors his so-called priorities while spending around two percent less than his own budget is “the most fiscally irresponsible budget he’s ever seen.”

“Governor Cooper should spare us the melodrama and save the theatrics for his political commercials.

“The people of North Carolina expect their elected officials to keep their word. Governor, if the things you’ve said and campaigned on are more than just empty promises, you will sign this budget.

“You can add $363 million to the state’s rainy day fund.  Or you can veto this safeguard.

“You can add thousands of slots to the pre-K program.  Or you can veto these pre-K slots.

“You can support efforts to improve road and bridge safety. Or you can veto safer roads and bridges.

“You can support scholarships for gold-star children of veterans killed in combat. Or you can ignore those kids.

“Governor, we see it daily across this state and this country. Voters are sick and tired of politicians who talk and talk, and promise and promise, but never deliver. The voters of this state are measuring politicians – Republicans and Democrats – by their actions, not their words.

“If you veto these important shared priorities that Republican and some Democrat legislators have supported through their actions, and you have supported only through your words, you will be judged on your actions, no matter what you have said.

“And if you block teacher pay raises, middle class tax cuts, Hurricane Matthew relief, and state employee raises, you will have lost your credibility with the voters.

“And we will quickly override your veto.

“So, governor, keep your promises to the voters and stop playing to the extreme left-wing of your party. Do the right thing and sign this commonsense, bipartisan budget today.”